KUALA LUMPUR (Aug 17, 2010): A 34-year-old bystander who was injured when police acted on a rally by the Coalition for Clean and Fair Elections (Bersih) in 2007, has filed a RM2 million civil suit against the police and the government.

Aleyasak Hamid @ Hassan, who was a hawker at the time of the rally, is seeking RM2 million in compensation, aggravated damages and exemplary damages for injuries which he says were caused by Federal Reserve Unit and ordinary policemen.

“They attacked me and stepped on my knee until it broke. I asked them to help me but they insulted me and kicked me,” he said.

“They took me to a truck, but I couldn’t enter it,” Aleyasak said, adding that he was finally helped into the truck by others.

Speaking after filing the suit at the Jalan Duta court complex here today, he said he was left in the truck for half a hour before being taken to the police station and then the Kuala Lumpur Hospital.

Aleyasak said he still suffers from the injury, which required surgery and costly monthly visits to the hospital.

“I can’t run, do heavy work or play with my children,” said Aleyasak, who currently helps his wife give personal tuition.

Meanwhile, Aleyasak’s counsel Fadiah Nadwa Fikri said the suit was being filed as nothing had been done since a police report was filed in 2007. 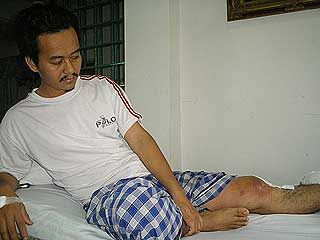 “We want the government to be responsible for the actions of the police,” she said.

“Police brutality can never have a place in Malaysia as they are supposed to protect peaceful demonstrators as urged by Suhakam,” added Fadiah.

The Bersih rally in 2007, which did not have a police permit, was aimed at campaigning for electoral reform and attracted an estimated 50,000 participants who gathered at several spots around the city before attempting to march to Istana Negara to hand over a memorandum.

Several thousand riot police used water cannons and tear gas to disperse the protesters and several dozen were arrested before being released on bail.